The host of the meeting, the Central Statistics Office (CSO) of Ireland, kicked off the meeting by welcoming the group to Dublin and presenting an overview of the CSO’s work, including that of the growing Environment and Climate Division. Paul Morrin, Assistant Director General, also presented a map of the previous and current London Group locations, emphasizing how far the group has come—both literally and figuratively—to bring the SEEA to where it is today.

The twenty-three previous locations of the London Group (yellow) along with the 24th meeting in Dublin (red). Figure courtesy of the CSO of Ireland.

One highlight of the meeting was the SEEA CF implementation session, which was done “World Café” style, with groups rotating among four stations of presenters. Participants had the chance to learn about the first ever pilot SEEA accounts for the United States, the experience of Statistics Sweden in moving from annual to quarterly air emissions, the Australian Bureau of Statistics (ABS) and Bureau of Meteorology (BoM) integrated water accounts and environmentally-related tax revenue accounts work by the OECD. The chance to share experiences in a small group setting encouraged questions, lively debate and sharing of experiences. 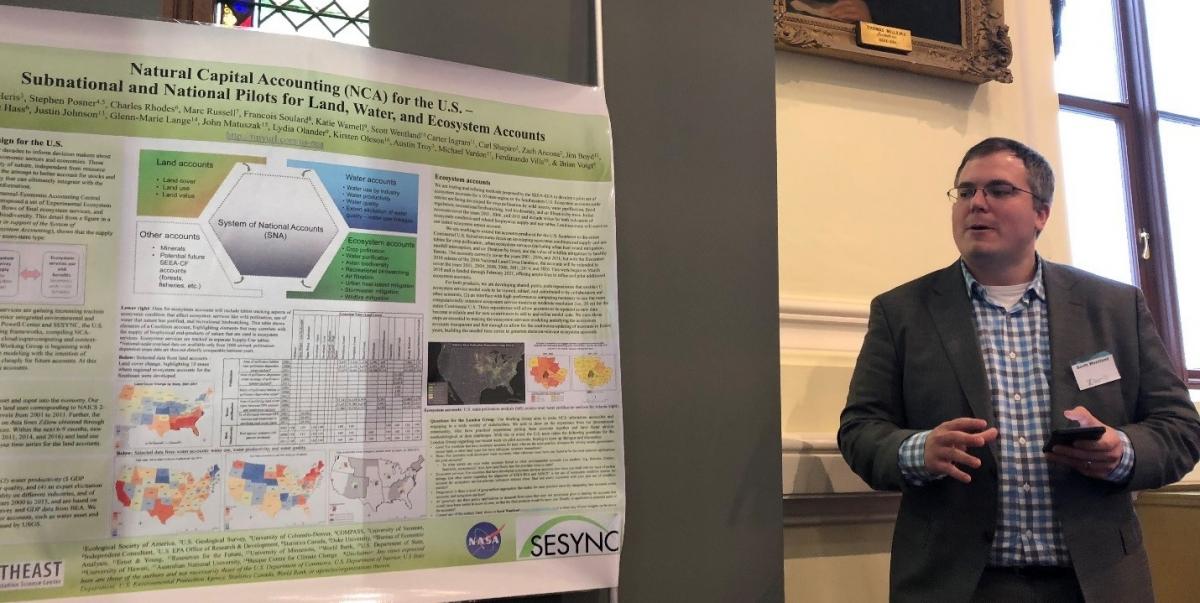 Scott Wentland of the Bureau of Economic Analysis presenting progress on pilot land, water and ecosystem accounts for the United States.

Another highlight of the meeting was the variety of presentations on the SEEA EEA. From the country experiences of two NCA&VES (funded by the European Union) project countries (South Africa and Mexico), to butterfly accounts in Australia, to the challenges of accounting for urban areas, the SEEA EEA session covered a range of issues affecting all aspects of ecosystem accounting—extent, condition, services and valuation. In addition, the progress of the SEEA EEA revision was a point of focus—not only the work done so far, but also the work to come and how the London Group might best engage in that work.

While the previous sessions had the environmental accounting community reflecting inwards on the methodological developments and compilation practices, this session forced participants to focus outwards, on how they can ensure that the numbers are understood and used by policy makers and the public. A presentation on the UK experience served as a case in point. In her presentation, Gemma Thomas of the Office for National Statistics, described how she and her team found their footing in the midst several new government policies on the environment and clean growth. To ensure that the SEEA CF remained relevant amidst these changes, she emphasized the importance of stakeholder engagement, the use of social media to increase responsiveness and relevance and tailoring one’s message to the specific audience.

At the end of the three and a half days, the group considered how next year’s meeting contribute to the revision of the SEEA EEA. Participants agreed that it would be beneficial to spend a similar (or greater) amount of time on the SEEA EEA next year. Country SEEA EEA experiences could be especially valuable, to ensure that the revised framework remains practicable for all countries—regardless of their stage of economic development—and takes into account compilation issues. Finally, the participants thanked the CSO of Ireland for hosting, as well as ABS for volunteering to host next year’s event, and noted the high bar that the CSO of Ireland had set—from the organization of the meeting itself to the excursion to the Guinness factory.