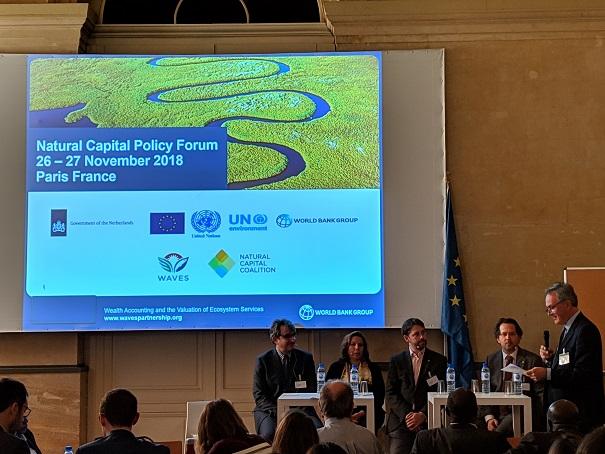 The applications of natural capital accounting (NCA) to two significant global policy processes and the opportunity to build bridges between public and private sector NCA practitioners were the themes of Third Forum on Natural Capital Accounting for Better Policy Decisions held in Paris on 26-27 November. The forum, which was organized by the World Bank WAVES programme, UNSD, the Government of the Netherlands and the Natural Capital Coalition, brought together approximately 100 NCA experts and policymakers from around the world. Over the two days, participants explored the roles that NCA could play in helping to achieve international climate commitments and shaping a post-2020 global biodiversity framework (see related article). Additionally, participants assessed opportunities associated with the Natural Capital Coalition’s “Combining Forces” initiative, which seeks to bring together the public and private sectors’ thinking on natural capital.

Discussions focused on the role that NCA can play in both climate change mitigation and adaptation. Saleemul Huq, director of the International Centre for Climate Change and Development, gave an address on international climate policy challenges where he underscored the importance of reducing deforestation and preserving the ecosystem as crucial for achieving climate change goals.

Presentations from Indonesia and Zambia outlined how NCA was informing their climate policies. In Zambia’s case, their water accounts are helping them assess the implications of a future with less predicted rainfall, in terms of identifying how to prioritize water conservation efforts and economic development opportunities. Similarly, the Indonesian presentation outlined ecosystem services models that helped them understand the effects of climate change, including sensitivity analyses on the connection between the spending on health care and respiratory diseases. Opportunities identified for NCA to inform climate policy included improved damage functions and updated social costs of carbon as well as targeting adaptation efforts.

Participants also pointed out that NCA can provide detailed information for policy-making at various levels of government, and that it needs to be streamlined into the international reporting processes. In order to achieve that, the participants suggested to develop case studies to identify on who will be impacted and how these impacts can be disaggregated on a subnational level, as well as generate solutions-based engagements of those affected.

Juha Siikamaki, chief economist for the International Union for the Conservation of Nature (IUCN), opened the second day with a keynote address on biodiversity policy challenges. He noted that the remarkable economic progress of the past 50 years has been accompanied by a staggering loss of biodiversity and the pressures of increasing population and rising living standards are expected to intensify over the foreseeable future.

Despite these trends, Siikamaki noted some cause for optimism, for example notable successful efforts to protect seriously endangered species show that conservation can produce successful outcomes. The forum occurred contemporaneously with the biodiversity COP in Sharm El Sheikh Egypt, and Siikamaki gave an update on the state of global biodiversity negotiations. He stressed the need to learn from the experience of global climate negotiations, including the efficacy of a bottom-up framework emphasizing voluntary commitments.  A topic of current discussion among the parties is the identification of an “apex target,” a simple indicator, similar to a 2°C target for climate change, that can be used to measure progress at the global and national levels.

Panelists from China, Mexico, South Africa and Uganda offered compelling examples of how their countries were employing NCA to inform biodiversity policy. For example, Uganda imposed quotas on the export of bark from the prunus africana tree, after analysis indicated that continued unsustainable harvesting would have negative effects on income and employment.

Linking the Public and Private Sectors

In recognition of the growing uptake of NCA by governments and businesses, the Combining Forces initiative seeks to bring together public and private sector approaches to natural capital. There was agreement that, where possible, it is in the community’s interest to speak with one voice. However, it was also recognized that different settings and goals will often require different approaches and even different language. Panelists and audience members identified collaboration has helpful in developing case studies, identifying data needs and potential sources and building a stronger community. Participants also discussed a draft “narrative” that presents the benefits of natural capital accounting.