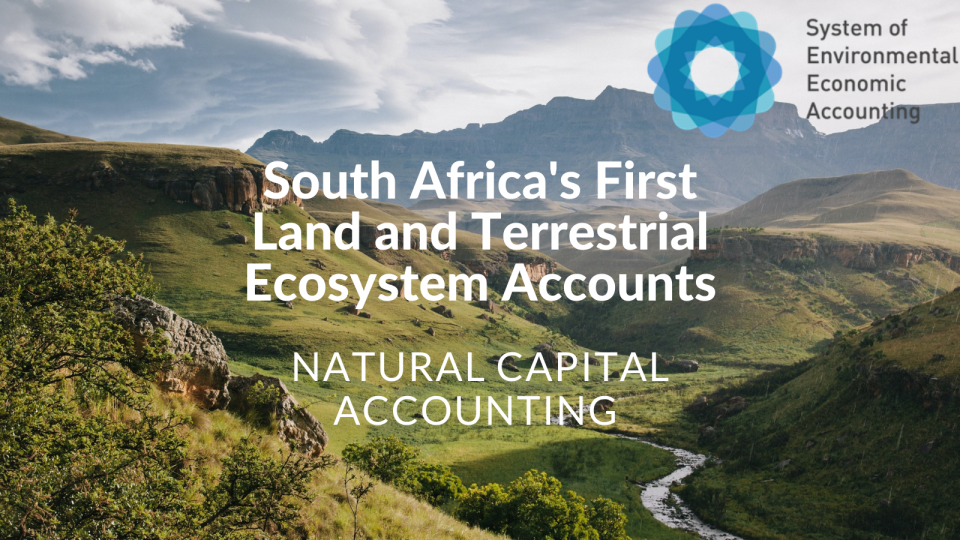 Pretoria, South Africa, 2 December 2020 - Today South Africa launches its first ecosystem accounts at national level, under the publication, Land and Terrestrial Ecosystem Accounts, 1990 to 2014. The publication, issued by Statistics South Africa (Stats SA) in collaboration with the South African National Biodiversity Institute (SANBI) and the Department of Environment, Forestry and Fisheries (DEFF), marks a milestone as the first land and ecosystem extent account at national level and the first in Stats SA’s new Natural Capital series.

The accounts, presented as accounting tables and maps, include multiple land uses (such as urban and cultivated areas) and multiple ecosystem types (such as grasslands, savannas and fynbos), and can be used to identify trends at the national level and also at finer scales (such as provinces and municipalities).

The publication is structured in two parts. The first part outlines changes in land cover patterns at national, provincial and district municipal levels. As an example, the province of Mpumalanga had the highest net change in mining area compared to other provinces, with a 74% increase in mining land cover between 1990 and 2014. Changes in commercial cultivation provide another example of changing land cover at national and provincial levels.  For instance, although the total area of commercial cultivation decreased, pivot-irrigated fields increased in extent by more than 200% nationally, with increases of more than 400% (off a low base) in the Eastern Cape and Free State.

The second part of the publication provides information about the state of South Africa’s terrestrial ecosystems and how this has changed from their historical state (before people began modifying the landscape intensively). A key indicator of this change is the Ecosystem Extent Index which reflects the proportion the natural or semi-natural state of each ecosystem type relative to its historical baseline extent (prior to major human modification of the landscape). This index is useful for identifying ecosystem types that have had large declines in extent, which in turn can impact on biodiversity and the benefits that those ecosystems provide for people and the economy.

An example is South Africa’s grassland biome, which covers portions of Mpumalanga, Gauteng, Free State and KwaZulu-Natal and plays a crucial role in the provision of water. The Ecosystem Extent Index shows that only two thirds of this biome remain under natural or semi-natural land cover, suggesting that its ecological functioning is at risk. Substantial areas of grassland have been replaced by intensive land uses such as forestry plantations and cultivation, which impact water quantity and quality.

These accounts are not only an important national milestone for Natural Capital Accounting in South Africa--they also make an important contribution and valuable tool to measure progress on the implementation of national strategies such as the National Biodiversity Strategy and Action Plan and National Biodiversity Framework. Further, the accounts can provide information towards monitoring the achievement of national development objectives, such as those in the National Development Plan and National Spatial Development Framework.

At a global level, the accounts provide information that can be used for South Africa’s country reports on the UN’s Sustainable Development Goals, particularly SDG15 Life on Land. Future accounts planned for ecosystems in the freshwater and marine realms will contribute to reporting on SDG6 Water and SDG14 Life under Water. The accounts may also be critical for South Africa’s reporting on the Post 2020 Global Biodiversity Framework to be adopted during the upcoming Conference of Parties for the Convention of Biological Diversity (CBD COP 15) in 2021.

The Land and Terrestrial Ecosystem Accounts, 1990-2014 is the culmination of a collaborative effort led by Stats SA and SANBI in taking forward ecosystem accounting in South Africa as part of the Natural Capital Accounting and Valuation of Ecosystem Services (NCAVES) project. The project, funded by the European Union, is being implemented also in Brazil, China, India and Mexico.

South Africa’s participation in the NCAVES project is contributing to revising the SEEA Experimental Ecosystem Accounting, which was first published in 2014, so that it can be adopted as a global standard by the UN Statistical Commission in 2021.