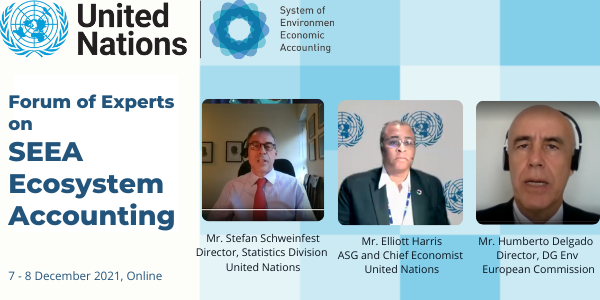 The sixth Forum of Experts on SEEA Ecosystem Accounting took place virtually on 7 & 8 December 2021, with over 300 participants from 66 countries, including scientists, environmental economists, statisticians, national/environmental-economic accountants, geospatial experts, representatives of line ministries, NGOs, academia and the private sector. The Forum provided an opportunity to share experiences and best practices in compiling ecosystem accounts, in particular in the pilot countries of the Natural Capital Accounting and Valuation of Ecosystem Services (NCAVES) project. It also provided a forum to discuss the SEEA Ecosystem Accounting implementation strategy and the interoperability of data and models for compilation of the accounts. Further it discussed opportunities to mainstream the SEEA EA into national and global initiatives.

The Forum of Experts was opened with a conversation between Elliott Harris, UN Assistant Secretary-General for Economic Development and Chief Economist of the United Nations and Humberto Delgado Rosa, Director of Natural Capital of DG Environment, European Commission. The conversation focused on the importance of natural capital accounting given the current global and European policy priorities and highlighted the important contribution of the SEEA EA in changing the views of how nature is perceived in economic decision-making processes.

Importantly, Mr. Delgado Rosa underscored how the SEEA EA is a “ground-breaking change to economic reporting…and it comes at the most opportune context in terms of European policy”, referring to the EU Green Deal and the EU Biodiversity Strategy for 2030. Mr. Rosa highlighted the strength of the SEEA EA, namely that it allows to go beyond  gross domestic product (GDP) by ensuring that the contributions of forests, oceans and other ecosystems are properly accounted side to side with economic performance. The conversation also highlighted the European Commission’s view that the SEEA EA provides as the statistical framework to monitor the green economy as well as the development of headline indicators to monitor progress on implementation of the post-2020 global biodiversity framework.

Mr. Harris similarly underscored the importance of the release of the SEEA EA in the UN context and a focus on going beyond GDP. He asserted “We try to measure progress through GDP, but we’re only touching on the surface of one dimension of sustainable development.” In particular, he pointed to the United Nations Secretary General’s UN Common Agenda, which urges Member States to go beyond GDP and implement the SEEA EA.

The first day of the Forum also served as the closing event for the NCAVES project. The five project countries, (Brazil, China, India, Mexico, and South Africa) presented the results of the pilot projects and shared lessons learnt from implementing the SEEA EA over the past 5 years. The experiences of the five project countries were also complemented with several presentations by other countries implementing ecosystem accounting, which highlighted the breadth of the experiences already gained.

The second day of the Forum focused on the implementation of the SEEA EA and highlighted the interactions with other related key initiatives, including the post-2020 global biodiversity framework, the Decade on Ecosystem Restoration, the climate change agenda, the IUCN work programme and business accounting. Another highlight of the second day was a session on the interoperability of data and models. The session introduced the data and model interoperability strategy for the SEEA and included a discussion by key players in the space on how to make SEEA data more interoperable. Finally, the second day also served to source experts’ opinions on how to take the work of the implementation groups forward in the areas of forest, carbon and oceans. The Forum was closed by Stefan Schweinfest, Director of UNSD, who reflected on the enthusiasm and dedication of the Forum’s participants, as well as the close of the NCAVES project and the work to be done in global implementation of the SEEA EA.