The results of the periodic Global Assessment of Environmental-Economic Accounting and Supporting Statistics are usually eagerly anticipated, as they act as a barometer for the overall progress of the SEEA community. The results of the 2020 Global Assessment, administered under the auspices of the UN Committee of Experts on Environmental Economic Accounting (UNCEEA), show that there is much to be proud of. At the same time, it pinpoints specific areas where the community can focus future efforts. 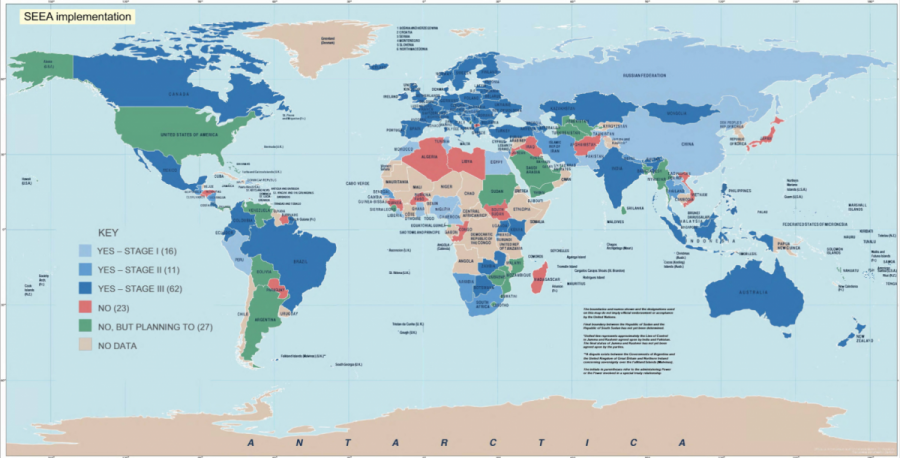 *See note at bottom of the page.

Finally, the Assessment gathered valuable information on the different SEEA-related policy priorities in countries. For developing and developed countries alike, the most frequently cited policy priority was climate change. Other frequently cited priorities for developed countries included circular economy and green growth, while developing countries cited biodiversity and protected areas as priorities. In terms of the use of the accounts, the vast majority of countries indicated that they used SEEA accounts for both Sustainable Development Goal (SDG) reporting and to inform national policies.

More details can be found in the Assessment report.

*Note:  The designations employed and the presentation of material on this map do not imply the expression of any opinion whatsoever on the part of the Secretariat of the United Nations concerning the legal status of any country, territory, city or area or of its authorities, or concerning the delimitation of its frontiers or boundaries. Final boundary between the Republic of Sudan and the Republic of South Sudan has not yet been determined. Final status of the Abyei area is not yet determined.  * Non-Self-Governing Territory.  ** Dotted line represents approximately the Line of Control in Jammu and Kashmir agreed upon by India and Pakistan. The final status of Jammu and Kashmir has not yet been agreed upon by the parties.  *** A dispute exists between the Governments of Argentina and the United Kingdom of Great Britain and Northern Ireland concerning sovereignty over the Falkland Islands (Malvinas).