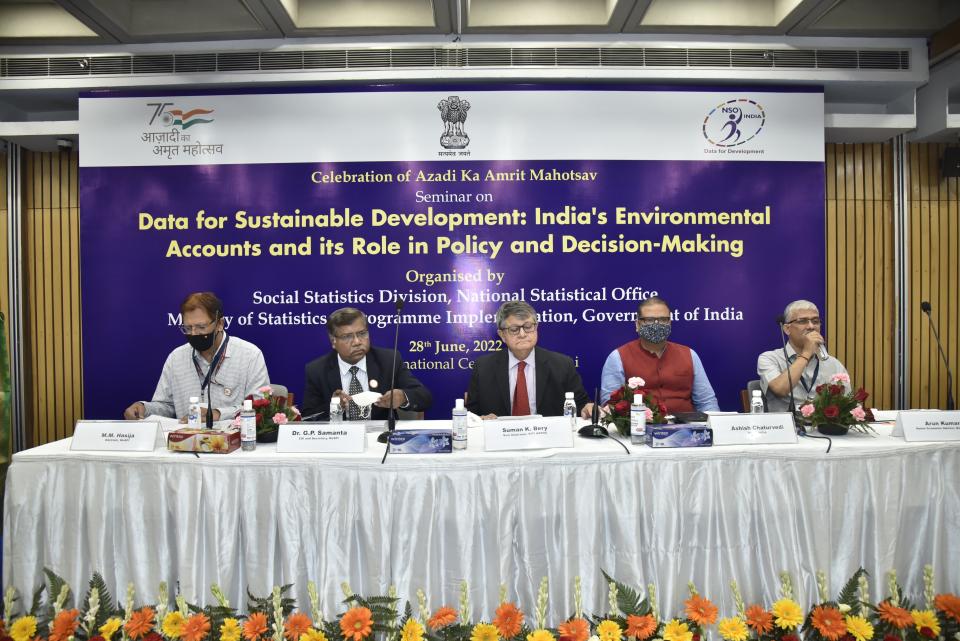 With natural capital underpinning all forms of life on earth, human well-being and the functioning of the socio-economic systems, it becomes pertinent to capture the value of the natural capital into statistics through System of Environment Economic Accounts (SEEA). To showcase the progress made in environmental-economic accounting in India and to pave the way for its future work, the National Statistical Office (NSO India) organized the seminar “Data for Sustainable Development: Environmental Accounts and its Role in Policy and Decision Making”, on occasion of the 75th anniversary of India independence, on 28 of June 2022 in a hybrid mode.

The well-attended seminar was opened by Mr. G.P. Samanta, Chief Statistician of India and Secretary of the Ministry of Statistics and Programme Implementation (MoSPI) and the keynote address delivered by Mr. Suman Bery, Vice Chairman of NITI Aayog, a government policy think tank, who commended the efforts led by MoSPI in the development of the SEEA in India.

The seminar featured speakers and participation from national line ministries, state governments, think tanks, research institutions, and international organizations who gathered to discuss India’s current work on natural capital accounting, challenges encountered, policy relevance, ways forward and the strategies for enhancing the use of the SEEA in the decision-making process.

The first session of the seminar focussed primarily on the SEEA perspective with its linkages with Sustainable Development Goals (SDGs) and its use for policy at national and sub-national level. The second session was devoted to the discussion on the Ocean Accounting which is still at a nascent stage and is one of the priority areas of work for India as specified in the five-year Strategy for Environmental Economic Accounts (2022-2026).

It was recognized that the Indian states also have a wealth of information that can be utilized to compile accounts at a more granular level. Acknowledging this fact, NSO, India is planning to conduct state workshops to raise awareness of the SEEA framework among state governments and subsequently encourage them to compile SEEA accounts.

The presentations and recordings of this seminar are available at the MoSPI website: https://www.mospi.gov.in/seminar-on-india-s-environmental-accounts-and-its-role-in-policies