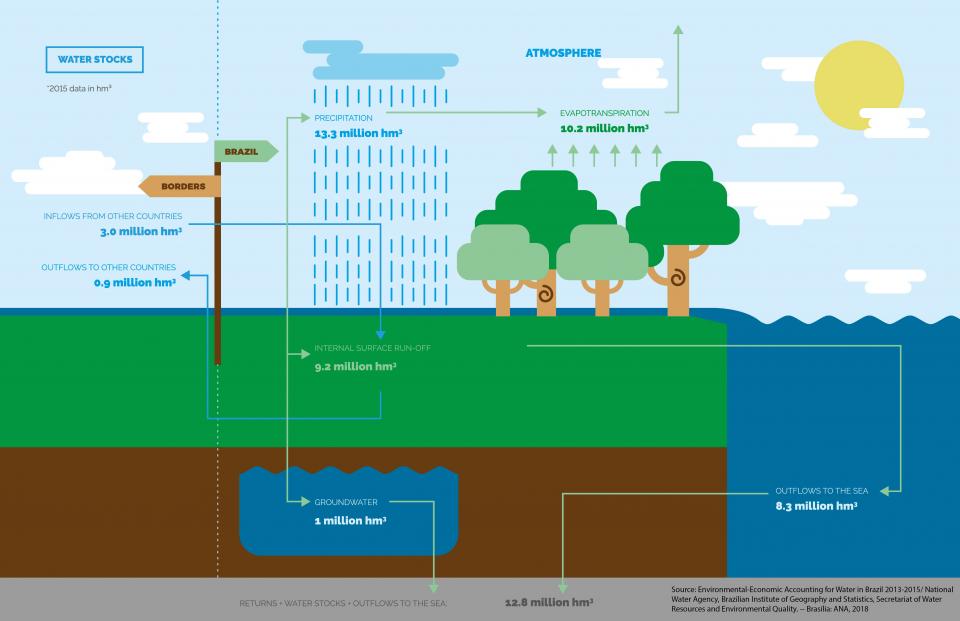 The President of the Instituto Brasileiro de Geografia e Estatística (IBGE), Roberto Olinto Ramos, unveiled Brazil’s water accounts (English) at the 8th World Water Forum, held in Brasilia from 17-23 March 2018. The release of the water accounts, a result of collaboration between IBGE, the National Water Agency (ANA) and the Ministry of Environment, marks the first time Brazil has produced water accounts. The accounts respond to a critical policy need, as over 850 cities in Brazil face major water shortages.

The accounts highlight the most efficient (and least efficient) users of water in Brazil for 2013-2015. Overall, an average of six litres of water were consumed for each Brazilian real (R$) generated by the economy in 2015. However, the accounts show significant differences in efficiency when broken down by sector. For instance, water usage per Brazilian real generated by the agricultural sector was more than 20 times that of the manufacturing and construction industry, at 91.59 liters/R$ compared to 3.72 liters/R$. The accounts highlight where there is room for Brazil to increase efficiencies and bring demand closer to supply. While Brazil cannot control the climate-related droughts that lead to many of the water shortages: “Studies like this provide information to government officials, universities and civil society so that everyone can think about how to use water efficiently”, commented Michel Lapip, an analyst for IBGE’s National Accounts section.

The release of the accounts coincided with the 8th Water World Forum, and representatives from IBGE, ANA and the Ministry of Environment presented the accounts at the event “Implementation and Monitoring of Sustainable Development Goal 6”. In line with the theme of the forum of “Sharing Water”, Sergio Ayrimoraes, the Superintendent of ANA, indicated how the accounts highlighted the issue of the distribution of water by territory: “It is important to have policies that consider the compatibility between the amount of water available with the development of different regions in the country, encouraging activities that depend less on this resource where it is not available, and make more efficient and rational use in those regions that have abundant water.”

Moreover, the SEEA water accounts were released and promoted with the recognition that they provide key data for multiple indicators  of SDG Goal 6, including those on water-use efficiency and water stress. In addition, other SEEA accounts also provide data for additional SDG indicators, such as those for Goal 8 on sustainable economic growth and Goal 15 on life on land. The potential and varied uses of the SEEA for environmental SDGs and policy are apparent to Brazil. With Brazil recently mandating the calculation of a SEEA compliant Green Domestic Product, the water account is the first of many SEEA accounts to come. According to IBGE National Accounts Coordinator, Rebeca Palis: "Our intention is to continue developing the water accounts and also to begin other environmental accounts. Let's start looking at energy, forest and ecosystem accounts."